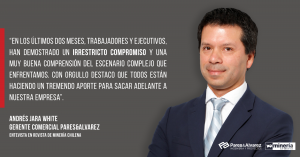 Pares&Alvarez describes the situation facing the country and the world in the wake of the COVID-19 pandemic as an unprecedented challenge for the company and the industry in general. According to this company, which specialises in engineering, consulting and project management, this is a scenario that will accelerate the validation of telecommuting, breaking paradigms and prejudices that existed in the productive sectors and society. “Telework is here to stay. Crises are opportunities. And one of them today
is that it is being demonstrated that through this modality, goals can be achieved efficiently”, says Andrés Jara, Commercial Manager of Pares&Alvarez.

The executive says that when the outbreak of Coronavirus began in the country, the company’s decision was to protect its employees, so that in the first days of March, 90% of the staff was already operating through teleworking, and a week later all of them were doing so. “It helped us to have a previous ‘technological construction’ to operate remotely, given that our head office is in the city of Concepción, in the Biobío Region, and the executive headquarters is in Santiago. Our work teams are mixed, operating permanently between the two offices,” he stresses.

Jara adds that companies without such experience will have to build the “muscle” necessary to be able to operate through teleworking. “Although we already had it, we are still looking to improve our performance,” he says.

Remote engineering
He believes that the current situation will accelerate remote engineering processes. “Unlike what was happening at the beginning of the year, today we increasingly imagine ourselves working in the cloud, using technology for collaborative work in digital or virtual environments, achieving optimal management with which we do engineering remotely, including in this digital space, the participation of our customers,” he says.

He says a clear example is the favourable contract they managed to close with Peróxidos do Brasil Ltda., in early May, to develop a new hydrogen peroxide plant in the commune of Coronel, Bío Bío Region, which will be designed entirely in teleworking mode in virtual design systems. “We negotiated with people located in Belgium, Brazil and Chile, which shows that it is possible to operate successfully in this way,” he says.

He adds that this scenario implies a new challenge. “Now our competition will not only be the engineering offices that are nearby, in Chile, but we are going to have to compete globally, but that also opens up many opportunities abroad,” he says.

Get Ready
Jara says that in the last two months his employees and executives have shown unrestricted commitment and a very good understanding of the complex scenario they face. “I am proud to say that everyone is making a tremendous contribution to move our company forward,” he says.

Among the measures adopted to give Pares&Alvarez operational continuity in the face of the country’s complex economic scenario, the company’s board and management team prioritised strengthening health protection measures, deepening actions to make work more efficient in a remote mode, protecting the employment of its employees and strengthening financial capacity.

“As a company, we are prepared to face the coming months with energy and strength. This crisis took us with the backing of a significant number of purchase orders to be executed, which allows us to ensure with absolute peace of mind that the company will be able to maintain an adequate occupancy in terms of its workload, have full operational capacity to face the work in progress, and have full financial capacity.
operational capacity to deal with work in progress and new orders from customers, as well as being in a solid financial position to ensure compliance with its commitments to its employees and suppliers,” he concludes.