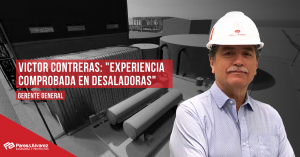 With more than 30 years of experience in engineering areas, Victor Contreras, general manager of Pares&Alvarez, knows in detail how the company faces each new challenge, since in his early years he was part of multidisciplinary teams of the engineering management, and then took over as Engineering Manager for 16 years, where he was in charge of the implementation of the first desalination plant project developed by the company 6 years ago.

“The work developed in the desalination plants has allowed us to add this experience and develop increasingly efficient projects, from the point of view of energy consumption, considering the high levels required by these plants. In addition, we have optimised the designs, which means that the projects can be cheaper from the CAPEX point of view. In the last six years, the company has developed the engineering of several desalination plants, both in Chile and Peru, with a total capacity of more than 3,000 l/s,” he says.

Victor Contreras explains that the first projects were for large-scale mining, the company worked on the desalination plant for the Obras Marinas project and the Codelco Radomiro Tomic Sulfides Phase II Desalination Plant, for a mining company in the Antofagasta Region, and in Peru, it developed the engineering for the desalination plant for the Talara refinery, a plant that delivers three different qualities of water, depending on the refinery’s requirements. In the last year, Pares&Alvarez has developed the basic and detailed engineering for three projects, both for mining and for human consumption.

“In fact, we are the engineering firm that has developed the most infrastructure in this area. We know the process and its needs well. We have experience in the designs, so we can ensure that they are technologically innovative and cost competitive,” he adds.

Seawater desalination is a proven process worldwide and these plants solve a key problem for the industry, especially considering that water is a scarce commodity today. Pares&Alvarez is recognised and has a high reputation within the national engineering world, because its collaborators are committed to executing quality works and on schedule, as recognised by the Ranking for Mining Suppliers 2020.

From 200 to 650
Victor Contreras explains that at Pares&Alvarez we have the capacity to support clients in all phases of a project. From the conception of an idea, identifying an opportunity, through the stages of pre-feasibility, feasibility, detailed engineering and the complete management of the project with its EPC or EPCM modalities. “We are one of the few companies in Chile that have the tools to support a client from the moment they have an idea until the plant is up and running. This is done through four main service lines: Environmental, Consulting, Engineering and Project Management”, he concludes.

In addition, the company works using cutting-edge technology with the BIM methodology, developing plans in 3 and 4 D to build without errors and with the maximum precision and detail possible.

Pares&Alvarez has been providing services for 26 years in different industries, such as mining, oil&gas, energy, wood derivatives, sanitary and infrastructure, among others, with more than 4,200 projects completed and more than 9 million HH in different specialties. The company grew from 200 employees in 2010 to more than 650 this year and today has offices in Calama, Santiago, Concepción and Lima.